I was lucky enough to grow up surrounded by trees to climb and creeks to explore and holes to dig. We had literally thousands of books in the house, no TV, and my father called radios “noise boxes,” so you might think the house was quiet. Well, you’d be wrong. There were six kids, with at least the normal amount of drama. 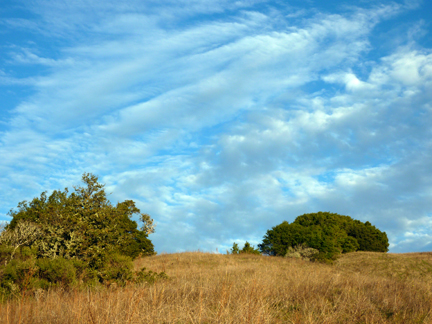 I thrive on solitude (although I am also the friendliest hermit you will ever meet) so every morning I would rise an hour before anyone else, have a quiet breakfast, and then, before the hubbub began, retire to my bedroom until it was time for school. On weekends and in the summer, I could often be found high in a tree, dreaming. We also spent most of each summer camping in the Santa Cruz Mountains less than an hour from home.  My father would commute down to Stanford where he taught, and return at suppertime with a fresh chunk of ice for our old-fashioned ice box. We hiked, tried to damn the creek to make it into a swimming hole (and never succeeded), caught blue-bellied lizards (or just their tails), swam in a pond with a muddy bottom (which we scooped up to throw at each other), picked fresh watercress for salads, and after doing the breakfast dishes, used the heat in the oven of our wood cook stove to bake a Jiffy Mix Cake, which always burned on one side. At our campsite we even had an outhouse in the woods that was actually a without-house, since it lacked the house part. 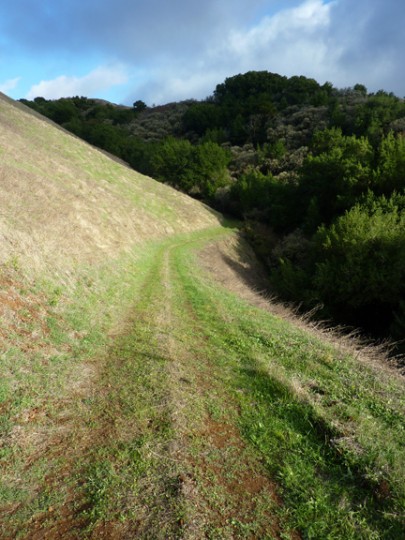 My parents eventually built a house on acreage a mile up the hill from our old campground, and still live there, at about 1,500 feet above sea level. At night the coyotes and owls sing, bobcats slink about, and the deer and raccoons raid my mother’s garden. The ocean, ten miles away as the crow flies, fills the horizon so high that it appears certain that it is about to overflow and fill the valleys. In the evening the fog often does just that, so that by morning the mountain tops have become islands in a soft white sea. Slowly the sun burns away the fog, revealing not the sea floor, but forested ridges with almost no sign of civilization all the way to the ocean, which still appears as if it will spill over. 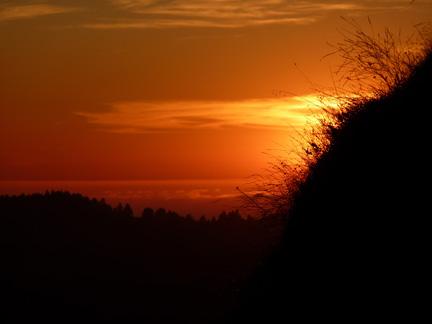 The amazing thing is that it is possible to drive down the hill from my parents’ home to Silicon Valley in about 35 minutes. It is a miracle of a place. I am so grateful to have grown up there. Most likely I would have clung to nature no matter where I grew up, but my parents made it easy. My father’s grandparents had a ranch in Sonoma, California, when he was a boy and he always remembered it as Shangri-La. That is what he calls their home now. I would not disagree. I could call my island home Shangri-La as well (that’s South Beach on my island, below).

Last month I discovered another Shangri-La on this earth for me: the Grand Canyon. My friend Michele Roberts, owner of a true community yarn shop, Purls in the Pines, in Flagstaff, took me there. I shall be forever grateful to her.  The colors are amazing and the enormous empty space is like a huge mountain range turned upside down, pressed into the earth, and then erased. The grandeur of the emptiness is beyond words. If I were in my early twenties, I would stop everything else I might be doing and go find any job at all there just to spend one full year through all the seasons. But I am long past that age, and so will have to content myself with an occasional visit, hopefully with a few overnights so I can experience it at dawn and sunrise too. 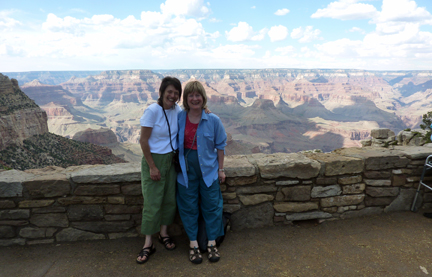 I had always assumed that the canyon must have guard rails all around the edge to keep people from falling in but there are rails only at certain lookout points, and there is a trail for miles along the south rim where we were. I was flabbergasted to see how carefree people were, small children included, standing inches from the edge (with a mile fall below), scampering along trails. I have never seen so many people merrily flaunting safety, and I kept wanting to pull strangers away from the edge. And although there were cell phones everywhere, no one was using them to text or talk or browse or all the usual things that make modern humanity seem like addicted robots. The only thing they were being used for was to take photos. Everyone seemed to be speaking in relatively quiet, reverential tones. It was Shangri-La.

I am currently in the thrall of a Shangri-La-like knitted form which is a combination of 3 basic elements and can be worn in at least a dozen ways. I’d love to tell you all about it, but can’t until it is fully developed and ready to release as a new collection. I expect it will be out in the first half of 2013, hopefully a little sooner. Right now I am drawn to my needles like a child to a candy jar, wanting to knit one more, to see what happens if I change this element, and then another, and another. I am so looking forward to sharing it with all of you when it is ready. I don’t even know how to categorize it, because it is so versatile.

I will be releasing a new design this month, however, called Dardanelles, shown below as a line drawing. I knit it with Frog Tree Ewetopia, which is one of the most meditative, soothing, cooperative yarns I have ever had the pleasure of running through my fingers. The result is a piece so springy and bouncy that if you stretch it and let go, you will be reminded of a Slinky, or a frog. Or a slinky frog. When the pattern is ready for release, I’ll announce it here as well as on Facebook and on Ravelry. 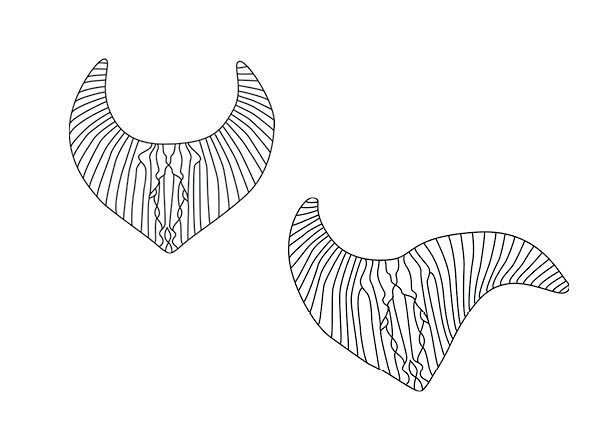 At the end of this month, I head to Taos, New Mexico, to teach at the legendary Taos Wool Festival.  I think there may still be a few openings in classes for the festival. I have never been there and feel so incredibly lucky that my life takes me to such beautiful places. 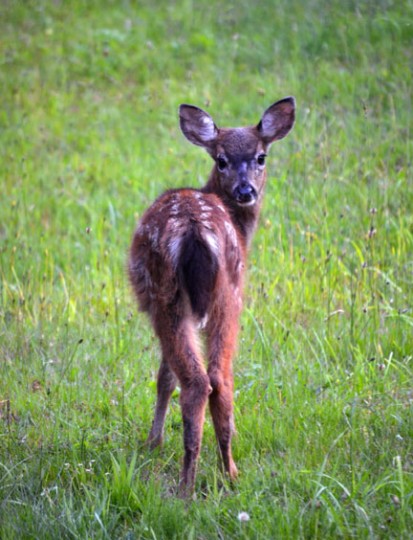 Our island summer usually lasts into October. The blackberries are only beginning to get ripe (Washington is covered in blackberries) and the fawns have not totally lost their spots yet, although they are blurring into the background rapidly. And bumblebees are drinking dandelion nectar, landing on a new flower every thirty seconds or so, and so from my window, I can watch dandelion heads bobbing in the grass. Shangri-La.