Summer in the San Juan islands, tucked under the wing of the Canadian Gulf Islands in the Salish Sea north of Seattle, is idyllic. Here’s the ferry terminal in Anacortes (on the mainland) as the sun melts into the water. 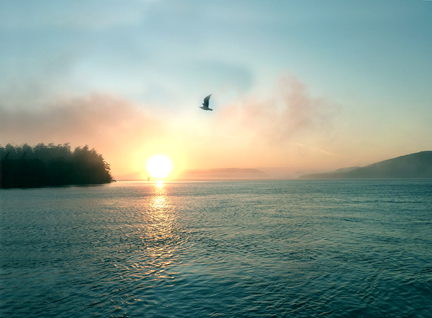 In fact, no matter the time of year, anytime I return home I feel so, so lucky to live here. This time I’d been in Portland for ten days, visiting my brother, teaching at Sock Summit, and seeing dear friends. 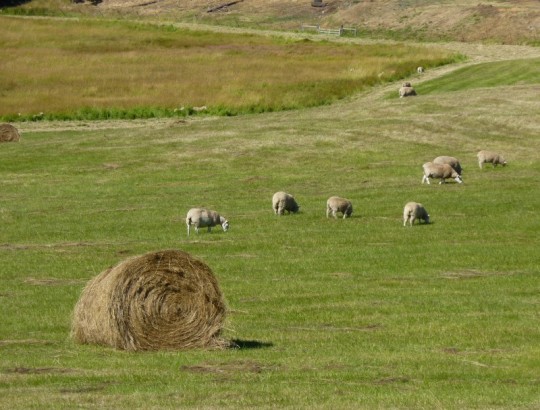 This is the scene that greeted me when I returned home. Fields of round hay bales and sheep… the island is dotted with these enormous spirals, which dwarf the sheep and resemble yarn-winder-wound balls of yarn, making it appear as if a giant’s knitting basket has tipped over onto the field.

And my fawns are growing tall and strong. The grass needs mowing, except I can’t. Could you mow your dandelions if creatures this beautiful like to nibble at them?

News alert! A fawn just appeared and while it nibbled, I filmed through the window, so you can see that I am telling the truth. Here you are.  Believe it or not, I see this sort of enchantment all the time and turn away to get my work done.

Sock Summit in Portland, Oregon, was another wonderful experience just like the first one two years ago. I spent the day before things began with Clara Parkes, researching artisan ice creams, a daunting task to which we devoted ourselves. Until the teacher’s dinner that evening, I had nothing all day but ice cream.  Our favorite was Salt and Straw. Their ice cream is so good that I cannot describe it and shall not even try. They have left me in a Pavlovian state; all I have to do is think of them and I salivate. Anyway, after filling ourselves with frozen wonderment, and lingering in one of the sweetest little fabric stores anywhere, Bolt, which happens to be in the same neighborhood as Salt and Straw (okay, I admit it; I dined there twice in one day), we went to join the other 60 amazing teachers for a normal dinner. We skipped dessert. 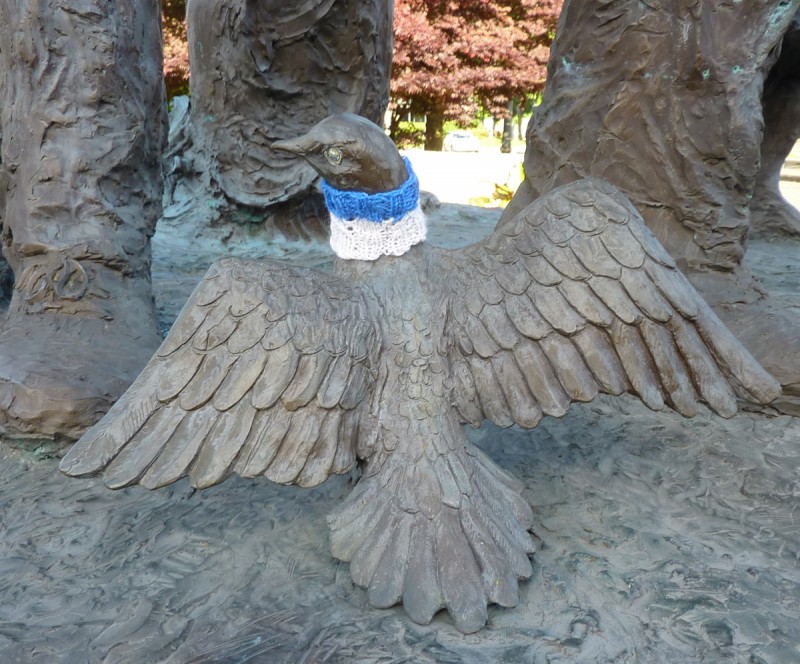 This pigeon right outside the convention center wore a different cowl every day, clothed by anonymous sock summiteers.

Like the first Sock Summit, there were thousands of intensely brilliant and adventurous knitters all concentrated in one place, sharing ideas, fondling one another’s clothing and projects, buying delicious yarn and tools and bags, and filling classrooms with so much devotion and brightness that we scarcely needed electric lights. I taught three single days of a class called “The Knitting Sleuth” for knitters with a forensic (investigative) bent, where we examined my library of thrift store sweaters cut up and framed into forensic samples. I even had a real live topologist in one class, and also a textile engineer – be still my heart! Here are photos of my students dissecting samples, seeking insights that might let their yarn and needles dance and create textures that have never before existed. 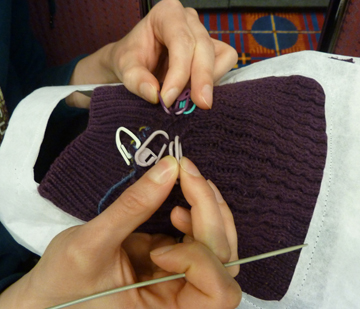 Yes, I know it looks like brain surgery.  It is. 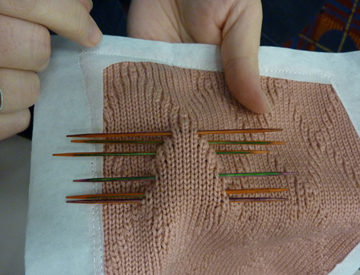 Those double-pointed needles are good for something (just kidding, really I am). Here they are being used to identify yarn pathways. It helps to identify things that are nearly surely so from the much larger category of things that are mysteries. You wouldn’t believe what this sample looks like on the other side, by the way. Not what you would expect. Everyone left these classes with a significant increase in brain synapse dendrite growth, by which I mean, we probably delay the onset of dementia by examining our knitting with intense curiosity and mental concentration and joy. At least I like to think so. 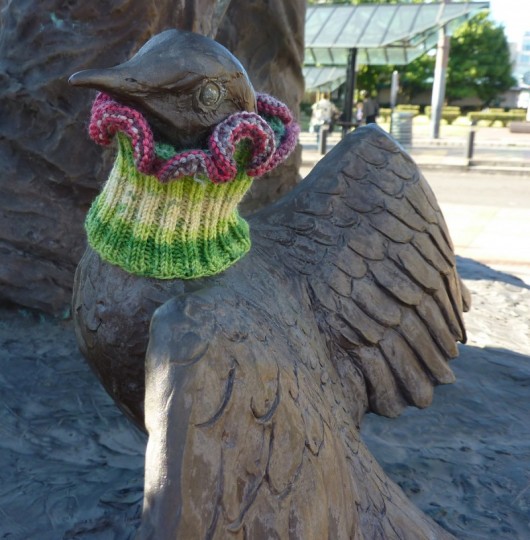 Here is our pigeon friend on the final day.

And finally, I arrived home, where I have been assiduously working on the second installment of my eBook, Cat’s Sweet Tomato Heel Socks (if you want to buy it, that is a clickable link). I have spent many days filming, illustrating, and editing a video tutorial for the Padded Sweet Tomato Heel, which is featured in the newest sock, Feather and Foliage (shown below). 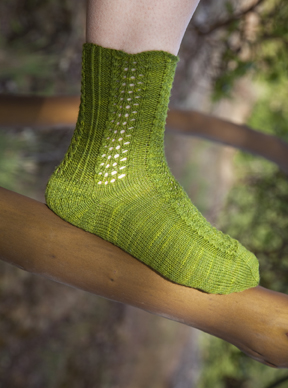 This sock is knit with Mountain Colors Crazyfoot, a particularly bouncy, well-spun sock yarn that makes your hands and feet happy both in the knitting and in the wearing. The Padded Sweet Tomato Heel is worked much like the original heel, with the inclusion of slipped stitch columns. There are a few other modifications to make this heel just right, and you will find some of them in the video and all of them in the eBook.

I am thankful and encouraged by the enthusiastic response the eBook has so far received from knitters. Every time someone says it’s the easiest sock they’ve ever knit, and that it fits like a dream, my heart sings.

Well, there are no deer in the yard at this very moment, so I can get some work done. Next on my agenda is a sock for the Blue Moon Rocking Sock Club (nearly done, and I am charmed by the way Tina’s colorway  and my design collaborated), getting the third installment of the eBook ready (it will include a new sock as well as instructions on working 2-at-a-time, which is easy as pie), and hopefully, finishing the patterns for the Anemone Hat and Winter Sanctuary Cowl, which have been pictured on my home page for weeks and weeks now.

Oh, and also the Zebra Hat, which is camel-approved. That’s Mona, our local camel.

Thank you, knitters and readers, for caring; I am honored and grateful to be supported by you in the work I love to do.